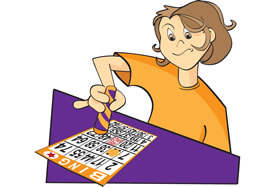 You may not have noticed that when you play uk bingo online most sites are based abroad. As we have mentioned before, this is so that operators can avoid complicated UK gaming laws of the UK.

You may not have noticed that most of these bingo sites often post a notice for players who are concerned about whether playing online bingo in their country is legal. This is because gaming legislation varies from country to country.

Not just for kicks

For most people bingo is usually seen as an inoffensive game among friends. Unfortunately this perception may be at odds with the legal system of the country you play in so it pays to be aware.

This week Bingo Hideout has learned that six British tourists were arrested in Turkey for playing bingo and then each fined £55 because they did not realise that the game was illegal there – even though the game was held as part of a fundraising night.

Check your facts as well as your numbers

This story only goes to highlight how important it is to stay in touch with the gaming laws surrounding your favourite game, whether you're playing a live game abroad or an online bingo game while out of the country.

While free bingo is permissible in most countries, it's worth checking before you play to avoid any embarrassing repercussions.