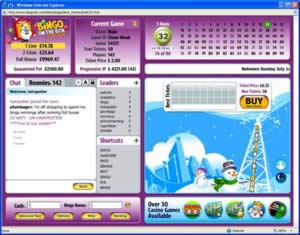 So, Bingo Night Live is coming to the end, but what about some of the other TV
bingo sites?

The best known one Bingo On the Box.com which launched about the same time as BNL
is growing and growing. They have just launched a brand new, totally LIVE Christmas
version, complete with Jazz Christmas music and snow. The show runs on sky for 9
hours a day, including in the evening time and you can play along online. It is
great fun. You can see your card on TV if you are winning and also see how close
you are on the live TV leader-board! The best thing is it doesn’t cost anything
through your phone line like some of the others. All tickets are paid for as in
normal online bingo.

We at Bingo Hideout like this feature very much as it means that you always
know how much money you are spending and tickets are as low as 5 pence anyway!

Don’t forget though Bingo On The Box isn’t just a TV bingo game. You can play
online 24/7 and they have one of the fastest growing bingo communities on the web.

As you know BingoOntheBox.com other boast is that it has the highest, most won
Progressive JackPot’s in online bingo. Over £20000 in PJP’s has been paid out in
the last two months alone. Of course, bingo on the box is also known for having
the most and best slots in online bingo too, and this month they are releasing
Four new slot machines, see the screenshots below!!!

What is more Bingo on the box.com, which boasts the biggest PJP’s is launching
3 new slots for December, as well as being the most Christmassy site on the net.
Just check out the screen shots!

Finally, www.bingoonthebox.com offers all new players a no-deposit £5 FREE to
try out the site and a 100% deposit bonus too so what are you waiting for?