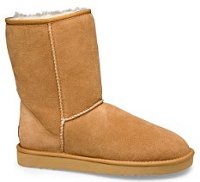 Do you have Uggs? Well the girls in the Bingo Hideout office are all currently mooching about in Uggs (well if not the real thing then something that looks distinctly similar).  For the uninitiated Ugg boots are the trendy sheepskin footwear from Australia that can be seen on female feet up and down the country and with a price tag just shy of £200 they are something of an object of desire.  In fact so popular are the Australian Ugg boots that recent International sales figures for the brand reportedly leapt to $39.3million for the last quarter which is almost double.

However if a report in the Daily Mail is to be believed then there is an inherent bug with the furry footwear – the mega expensive Uggs let in water.  Many people have been buying Uggs to keep their feet warm in the dire weather that the UK has been on the receiving end lately, the Bingo Hideout girls included.  So have our Bingo Hideout readers got soggy feet from wearing Uggs?  Well we know that partly the problem that the Daily Mail reports on is true, because all of us in the Bingo Hideout office that wear Ugg boots have at times suffered with the soggy feet syndrome.  However common sense prevails and we know that although Uggs are nice to look at and of course incredibly warm that they DO NOT keep your feet dry, nor to get to the point are they intended to.

Don’t wear your slippers to the shops

The Daily Mail article has generated some comments from readers across the globe including Australia.  The readers from down under explain that Uggs were never designed for use in extreme weather conditions anyway, in fact they were designed for wearing around the house!  So all of us are, it seems spending out almost 200 quid on glorified rather fashionable carpet slippers! How many of us feel that walking about the shops at the weekend in our slippers is a fashion statement – well about 80% of the 12 to 30 year olds in the UK it would seem, Bingo Hideout girls too!